Is potassium iodine necessary for overall health? Must read information!

I have cut and pasted the FDA guidelines for iodine use in the event of a radiation release.
It may save your family’s life.
TB

Here is some more technical info on the Japan disaster and the importance of getting iodine into your system as soon as possible.

So why would taking extra iodide protect against radiation poisoning? To answer that, we need to take a pretty big step back.
Many nuclear reactors get their energy by smacking uranium-235 with a neutron, called fission. And in a turn a single act of fission can create more than 200 million times the energy of the neutron that kicked it off in the first place. I’m not going to go into why here, but it has to do with the famous Einstein equation.

So when uranium-235 decays, it gets broken into a lot of smaller fragments. One of these is iodine-131. It’s also radioactive. Out of the most common fission products of uranium, iodine is the only one that’s present naturally in our bodies.
There are actually fourteen major radioactive isotopes of iodine. The majority of them are not considered dangerous, because they have very long half-lives. That’s the time it takes for half the radioactive material in the element to decay.

I’m simplifying here, but you get the general idea: iodine-131 has the potential to do a lot more damage to the body, because it gives off more radiation in a short period of time.
And where it’s going to do that damage is mostly in the thyroid. 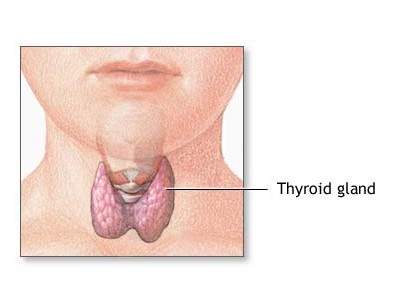 That little butterfly-looking thing in your neck is the only part of the body that can absorb iodine. It pulls it out of food and, along with the amino acid tyrosine, converts it into the hormones thyroxine (T4) and triiodothyronine (T3).
T3 and T4 go off into the blood stream and the rest of the body where they oversee the conversion of oxygen and calories to energy. Every single cell in the body relies on these hormones to regulate their metabolism.
So imagine if the iodine absorbed by the body were radioactive. That is very bad and very deadly.

Triiodothyronine and thyroxine: hot or not?
Iodine is pretty volatile . So if a nuclear reactor were to leak, iodine-131 might be in the air. Which people might breathe in. Which could get into their thyroids. Which could cause radiation poisoning in the short term. In the long term, breathing radioactive iodine can cause thyroid cancer, especially in kids.
To minimize the damage, people who may be/have been exposed to radiation from a power plant can take iodide pills. These work by saturating the thyroid with nice, non-radioactive iodide. That way, if any radioactive iodine does come along, the body won’t absorb it– the thyroid can only absorb a finite amount of iodine at a time.
If people can get these pills 48 hours before or eight hours after radiation exposure, it can reduce thyroid uptake of iodine-131 and hopefully decrease the risk of radiation-induced thyroid cancer.

[ETA: I do want to point out that this will ONLY protect against internal iodine radiation poisoning. Not radiation from cesium-137 and strontium-90, extremely dangerous fission products of uranium-235.]

Healthmasters.com now carries potassium iodide. You can overdose on iodine, although it takes several grams. But burning of the mouth, throat, and stomach, fever, nausea, vomiting, diarrhea, and/or a weak pulse may be preferable to getting cancer later. To prevent overdose I have also included the FDA guidelines to iodine usage.

This treatment was used in the the 1986 Chernobyl nuclear reactor accident. There were fewer cases of childhood thyroid cancer in areas that had access to iodine tablets, compared to areas that didn’t, or got them too late.
Hopefully, people near the Fukushima Daiichi power plant have had access to iodide pills, and be able to get out of there. Radiation’s not something you want to mess around with, especially if you’re pregnant or a child.

1. What does potassium iodide (KI) do?
The effectiveness of KI as a specific blocker of thyroid radioiodine uptake is well established. When administered in the recommended dose, KI is effective in reducing the risk of thyroid cancer in individuals or populations at risk for inhalation or ingestion of radioiodines. KI floods the thyroid with non-radioactive iodine and prevents the uptake of the radioactive molecules, which are subsequently excreted in the urine.

3. Who really needs to take potassium iodide (KI) after a nuclear radiation release?
The FDA guidance prioritizes groups based on age, which primarily determines risk for radioiodine-induced thyroid cancer. Those at highest risk are infants and children, as well as pregnant and nursing females, and the recommendation is to treat them at the lowest threshold (with respect to predicted radioactive dose to the thyroid). Anyone over age 18 and up to age 40 should be treated at a slightly higher threshold. Finally, anyone over 40 should be treated with KI only if the predicted exposure is high enough to destroy the thyroid and induce lifelong hypothyroidism (thyroid deficiency).

4. What potassium iodide (KI) products are currently available? (via drug manufactures or as a supplement)

6. What dosages of potassium iodide (KI) should be taken for specific exposure levels?
FDA recommends the following dosing of KI for thyroid blocking:

7. How long should potassium iodide (KI) be taken?
Since KI protects for approximately 24 hours, it should be dosed daily until the risk no longer exists. Priority with regard to evacuation and sheltering should be given to pregnant females and neonates because of the potential for KI to suppress thyroid function in the fetus and neonate. Unless other protective measures are not available, we do not recommend repeat dosing in pregnant females and neonates.

8. Who should not take potassium iodide (KI) or have restricted use?
Persons with known iodine sensitivity should avoid KI, as should individuals with dermatitis herpetiformis and hypocomplementemic vasculitis, extremely rare conditions associated with an increased risk of iodine hypersensitivity. A seafood or shellfish allergy does not necessarily mean that you are allergic or hypersensitive to iodine. People with nodular thyroid with heart disease should not take KI. Individuals with multinodular goiter, Graves' disease, and autoimmune thyroiditis should be treated with caution -- especially if dosing extends beyond a few days. If you are not sure if you should take KI, consult your healthcare professional.

9. What are the side effects ?
Side effects are unlikely when KI is used at the recommended dose and for a short time. The following are possible side effects:
• Skin rashes
• Swelling of the salivary glands
• “Iodism” (metallic taste, burning mouth and throat, sore teeth and gums, symptoms of a head cold, and sometimes upset stomach and diarrhea)
• An allergic reaction can have more serious symptoms. These include fever and joint pains; swelling of parts of the body (face, lips, tongue, throat, hands, or feet); trouble breathing, speaking, or swallowing; wheezing or shortness of breath. Severe shortness of breath requires immediate medical attention.

10. Should I check with my doctor first?
Potassium iodide (KI) is available over-the-counter (OTC). However, if you have any health concerns or questions, you should check with your doctor.

11. As a doctor, should I be recommending potassium iodide (KI) for my patients who request it?
As with any drug, physicians should understand the risks and benefits of KI before recommending it or prescribing it to patients. We recommend that physicians read our guidance for more information. It is available on the FDA Drug Guidances web page, under procedural guidance #18. The FDA guidance discusses the rationale and methods of safe and effective use of KI in radiation emergencies. It specifically addresses threshold predicted thyroid radioiodine exposure for intervention and dosing by age group. The recommendations for intervention are based on categories of risk for thyroid cancer, with the young prioritized because of increased sensitivity to the carcinogenic effects of radioiodine.

12. Should I go out and buy potassium iodide (KI) to keep on hand?
KI works best if used within 3-4 hours of exposure. Although FDA has not made specific recommendations for individual purchase or use of KI, the Nuclear Regulatory Commission has contracted to purchase KI for states with nuclear reactors and states that have population within the 10-mile emergency planning zone, e.g., Delaware or West Virginia.

13. How do I know that potassium iodide (KI) will be available in case of an emergency?
FDA will continue to work with interested pharmaceutical manufacturers to assure that high quality, safe, and effective KI products are available for purchase by consumers, by state and local authorities, and by federal government agencies electing to do so.
-

Healthmasters Potassium Iodine
Iodine is most noted for its action in thyroid health and activity. Iodine accounts for sixty-five per cent of the molecular weight of T4 and fifty-nine per cent of T3. Fifteen to twenty mg of iodine is concentrated in thyroid tissue and hormones. However, seventy per cent of the body's iodine is distributed in other tissues, including the oral mucosa, salivary glands, thymus, epidermis, mammary glands, eyes, gastric mucosa, the cervix, prostate and choroid plexus. Iodine is thought to be in every cell in the body.

Iodine is one of the 14 essential minerals that are necessary in the growth and maintenance of bones, teeth, hair, blood, nerves, skin, hormones, breast and prostate tissue, etc.

TO READ MORE ABOUT IODINE AND THYROID HEALTH CLICK HERE