Measles and Vaccines: A Review of Unpopular Opinions

I have written a couple of articles about the recent measles scare and Rockland County’s fruitless and nonsensical attempt to prevent the spread of measles, but this article is going to be slightly different. Unpopular opinions in science rarely seem to reach the light of the mainstream media and are often directly punished as illustrated in a recent article, “A Perfect Example of Conflict of Interest in the Scientific Community, Glyphosate Research.” I believe it is essential to examine opinions and facts objectively without influence from special interest groups. This article will review controversial points, facts, and ideas about measles and measles vaccines.

Based on the recent hype and drama of the mainstream media, you would think the recent measles outbreaks resemble something of that from a zombie apocalypse movie, and measles is spreading around the United States so fast there is little to no hope for America. I have one question: Where was this hype in 2014? 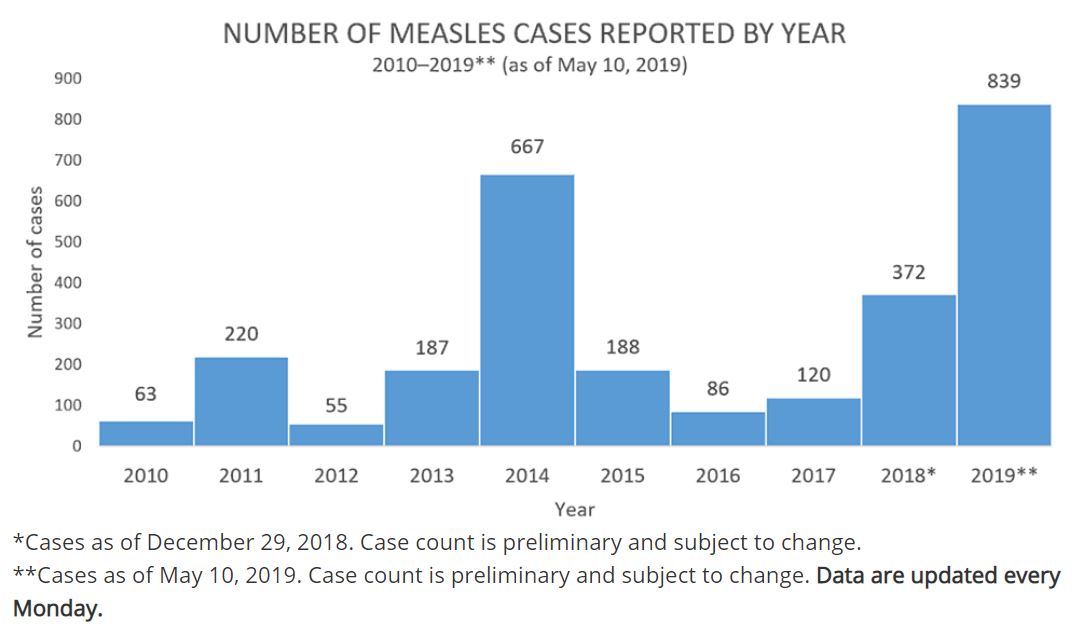 According to the CDC continuously updated report, there were 839 measles cases in the United States from January to May 10, 2019. Remember, there are over 323,000,000 citizens in the United States. However, in 2014, there were 667 measles cases in the United States. I am fully acknowledging there are more this year, but the spike in cases from 2013 to 2014 did not seem to spark the interest of the mainstream media. There were no outcries for draconian and forced immunizations. There were no bills saying parents should have their children taken from them if they chose to elect not to have them vaccinated [2] [3].

It should also be noted it is extremely possible that people who are being vaccinated are the main people who are spreading it because the MMR vaccine contains a live vaccine [16].

My recent vaccine articles go into more depth on that possibility – click here to read.

Now, I understand measles is contagious and deadly, but in the United States, the vast majority of us do not have to worry about dying from measles. In fact, death from measles declined over 99% – from the 1800s – before the measles vaccine was introduced in 1963, and within the last fifteen years, there has only been one death in the United States related to measles [4], and the woman who died was taking immunosuppressive drugs and had been vaccinated as a child; the measles infection was discovered after the woman died during an autopsy. However, there have been many deaths and complications related to the MMR vaccine.

As of November 30, 2018, there were 92,844 reports of measles vaccine reactions, hospitalizations, injuries, or deaths which made it to the federal Vaccine Adverse Events Reporting System (VAERS), including 457 related deaths, 6,902 associated hospitalizations, and 1,736 related disabilities [12] [13] [14]. Of all the adverse effects, 50% of them occurred in children 3-years-old or younger [15].

But you are not supposed to know that.

Also included in the MMR vaccine, is protection from mumps [sarcastic emphasis on protection]. You may think the MMR vaccine is very useful in protecting individuals from mumps, but if you believe that, you should be made aware Merck, part of the Big Pharma vaccine cartel, has been in Federal Court since 2010 on fraud charged in conjunction with the mumps vaccine [5].

Two Merck employees came out as whistleblowers and claimed Merck has been falsifying MMR vaccine data to make the vaccine seem much more effective at preventing mumps than it is. If these claims are valid, then you would see a resurgence of mumps cases, and that is precisely what happened.

As a result of the vaccine’s non-efficaciousness, there was a resurgence of mumps this year. According to the CDC, from January 1, 2019, to April 26, 2019, 736 mumps infections have been reported to the CDC, and during 2016 and 2017, there were almost 12,000 cases reported [7]. To compare, there were only about 2,500 cases during 2014 and 2015 [7]. Again, this sharp increase in mumps cases did not warrant the mainstream media to perform the same outcry then as they have done today with measles.

The paradox of these mumps cases is it seems a vast majority of the individuals have been vaccinated. When the CDC investigated the 2015-2016 mumps outbreak at the University of Iowa, of the 301 cases investigated, 7% had severe complications from orchitis, swelling of the testes which can result in sterilization, to three students suffering from transient hearing loss, two from mastitis, and one case of meningitis, but all were fully immunized against mumps with two doses of the MMR vaccine [8].

Mumps can cause serious issues, but the problem is when the vaccine’s effectiveness is wearing off, people are older, and old age is when serious mumps complications occur. The mumps vaccine does not provide long-term immunity and only delays the chance people will contract mumps, not prevent it.

Therefore, I believe the MMR vaccine should have never been approved. The fact that these companies that it would be a brilliant idea to combine three live viruses in a vaccine is iconic. If the FDA, HHS, CDC, and the United States Congress were genuinely concerned about the safety and efficacy of the MMR vaccine, the MMR vaccine would have been recalled.

Earlier, I mentioned whistleblowers in the CDC. Dr. William Thompson stated he and his colleagues altered, hid, and threw out data that showed controversial truths and adverse effects about the MMR vaccine [9] [10].

Thus, if the supreme leaders of America want us to believe we should be forcefully vaccinated at police gunpoint or imprisoned to prevent the spread of measles, where is the outrage and propaganda for the over 23,000 mumps cases that have happened in the last decade [7]?

That is because the non-effectiveness of the MMR vaccine regarding mumps does not fit the narrative.

I bet you did not hear this story:

It was reported this year there was an outbreak of mumps on a United States Navy warship, and here is what is interesting: all the individuals on the ship received the MMR vaccine [11].

Maybe it would cause people to examine the mumps-portion of the MMR vaccine and how much of a failure it is? But you are not supposed to talk about that.

Could Naturally Occurring Measles and Mumps Infections Save Lives?

I am fully aware this heading (^^^) sounds ridiculous; I thought it did too when I first read it, but as I did more research on the topic, it became more interesting.

A 2015 study examining over 100,000 individuals investigated the association of measles and mumps to cardiovascular disease came to a paradoxical conclusion: “Measles and mumps, especially in case of both infections, were associated with lower risks of mortality from atherosclerotic CVD” [17]. CVD stands for atherosclerotic cardiovascular disease and is a condition when plaque builds up inside your arteries. The study found men naturally contracted measles and mumps; they had 29% fewer heart attacks and 17% fewer strokes [17]. Woman experience a lowered chance as well, but not to the same extent as men.

Therefore, if you were to extrapolate with the information provided by the study and apply it to the United States, you could discover something interesting.

Now, I know it is a stretch to come to this conclusion, but even if only 50% of the possibility were true, that would still be a lot fewer heart attacks and strokes.

I will digress for a moment; a briefly mentioned earlier, a death in the United States relating to measles is infrequent and rare, and the United States has not seen a child die from measles in decades. When examining measles death estimates to measles cases from the 1980s, probabilities range from 1 in 1000 cases to 1 in 100,000 cases.

An additional study showed a measles infection during childhood could play a paramount role in preventing cancer, and similarly, a study also claimed a mumps infection during childhood may help to prevent ovarian cancer in women [19] [20]. Rather than studying the benefits of childhood infections, which would be career suicide, scientists primarily focus on studying sickness, pharmaceuticals, conventional medicine because that is where the money is thanks to Big Pharma.

There seems to be a paradoxical association between highly vaccinated populations and measles vaccinations. China has an extremely high vaccination rate. A new, 2019 study showed measles-containing vaccination (MCV) is as high as 97% for the first and second dose, with many children also receiving a third dose [21]. However, Chinese public health officials are still concerned that the measles vaccine has failed to generate herd immunity in China.

The 2019 study found 25% of the measles cases they analyzed for the study “received 1 dose prior to contracting the disease” [21].

Researchers also found two or more doses only seemed to delay measles cases, and the onset was similar to if someone were to receive only one or no doses of the vaccine [21]. The researchers concluded that one vaccine had insufficient protective effects and being vaccinated at the earliest recommended time, 8 months, seemed to have a reduced immune response regarding measles immunity [21].

The researchers continue to cite information stating that MCV effectiveness may be as low as 23.1% for one dose [21]. They also cited a Netherlands study that said, “children vaccinated at 9 months had significantly lower concentrations of measles antibodies compared to a control group at 4 years of age,” indicating vaccination at an early age is not producing measles immunity as commonly believed [21].

The study’s conclusion provided disappointingly incomplete information for the effectiveness of MCV:

“This analysis of measles cases in Tianjin found that among children with a recorded vaccine history, a substantial number of those who contracted measles had received at least one MCV dose. Although time-to-diagnosis following vaccination increases with receipt of each successive dose of measles vaccine, the fact that 8.5% of cases in the surveillance dataset and 26% in the case series contracted measles despite 2 or more doses of MCV is surprising. This also has implications for the VE of the measles vaccine series in Tianjin. Future research is needed to identify whether this is due to primary or secondary vaccine failure, and whether cold chain management, low vaccine efficacy, scheduled dose timing, or host factors such as co-morbidities and waning immunity might be responsible. This analysis motivates further research to discern the cause of these breakthrough cases in both outbreak and isolated case settings.” [21]

This is not the first study exemplifying the ineffectiveness of measles vaccines. Below are five more reviews stating similar reports:

These are only six of the numerous studies examining the ineffectiveness of measles vaccines. For the full list, see reference [28].

My goal with this article was illuminating opinions about measles and measles vaccines that the mainstream media and their associates would not dare to mention. I hope at least one statement, statistic, or fact pricked your interest while reading this article. Remember, it is essential to be educated, but it is also important not to only be taught by one source, so make sure you do your research.