This article is the second part to this series. Click here to read Part 1.

With all this vaccine hype, you must ask yourself “what is it the Big Pharma funded corporate ‘mainstream’ media would like the public to think?” If you examine the news objectively, the mainstream media is pushing the narrative that “anti-vaxxers” are the cause of measles outbreaks and therefore, should be a public threat, and these groups are using this narrative to try and pass legislation to mandate vaccines against the will of parents and objectors.

However, there is an objective civil rights rebuttal to the argument of mandatory vaccination, and groups from both sides, pro and anti-vaccine, understand this principle. These groups want to protect individual liberty and prevent medical procedures from being forced upon them.

Even current statistics have shown that the majority on both sides are against mandatory vaccines. Barbara Loe Fisher of the National Vaccine Information Center (NVIC) recently wrote:

“Since 2015, no state legislature has removed a vaccine exemption.

This year, while 11 states are proposing to restrict or eliminate vaccine exemptions, NVIC is supporting 61 bills that expand exemptions or protect vaccine informed consent rights (as of Mar.1, 2019), the largest number of bills we have ever supported in a legislative session.

This pushback against forced vaccination is being met with fury by doctors and lawyers inside and outside of government..”

Even Fisher attests to the pushback against the mainstream narrative:

“The signs are everywhere that people are trying to throw off the chains binding them to failed medical and public health policies that cost Americans more than three trillion dollars a year in health care costs.

Americans are beginning to understand that trusting blindly and saluting doctors smartly for the past 40 years has not prevented 1 child in 6 from becoming learning disabled, or 1 in 9 from suffering with asthma, or 1 in 10 from struggling with mental and behavior disorders or 1 in 40 from developing autism.

Highly vaccinated and medicated Americans are very sick, with millions of children and adults suffering with immune and brain dysfunction marked by chronic inflammation in their brains and bodies that confines too many of them to special education classrooms and frequent trips to doctors’ offices to try to deal with a lifetime of chronic illness and disability.

No public health official, professor or legislator in America can explain why millions and millions of children and more than 1 in 2 adults are chronically ill or disabled.

This is the elephant in the room at every public hearing on bills proposing to take away or expand vaccine informed consent rights being held in state legislatures today.”

This brings up the question: Who is benefitting from mass measles vaccination campaigns? 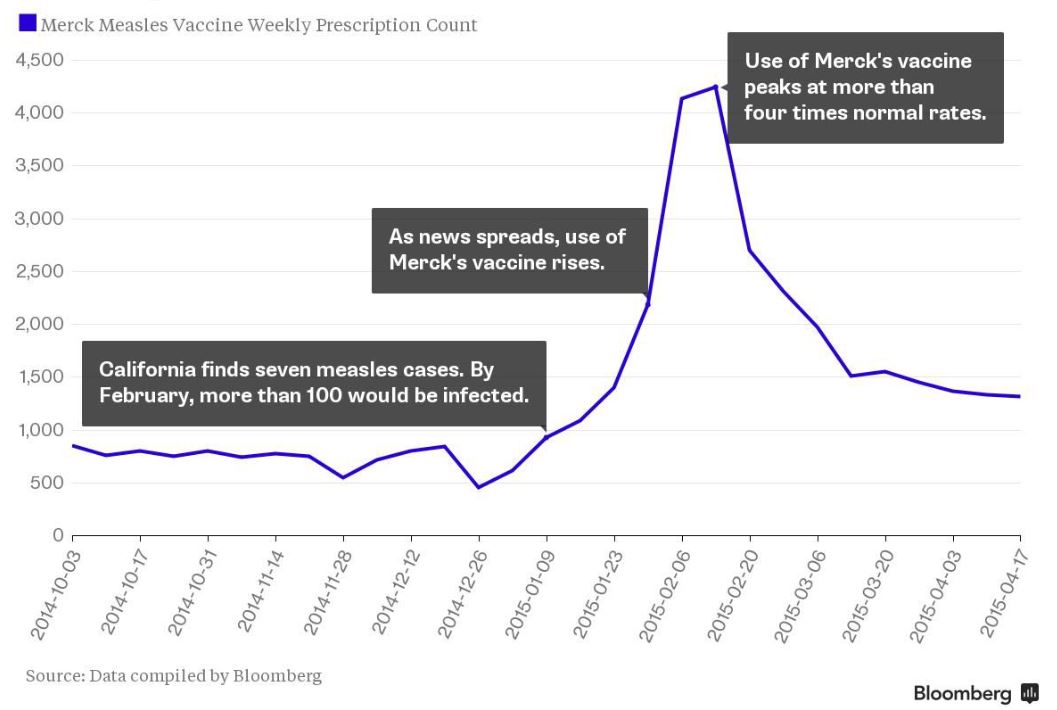 In 2015 when the corporate pharma-funded media broadcasted the Disneyland Measles “crisis” as something comparable to the apocalypse, Merck’s vaccine’s sales soared. Bloomberg even reported on this event:

“There’s nothing like an outbreak to get parents to vaccinate — or to help vaccine sales.

As a measles outbreak that started in California grew from seven cases on Jan. 7 to more than 100 a month later, sales of Merck & Co.’s measles vaccine surged as well.

From the first week the measles outbreak was in the news to a month later when cases neared their peak, the use of Merck’s M-M-R II vaccine more than quadruped to more than 4,000 a week, according to data compiled by Bloomberg.

Merck reported first-quarter results today showing that sales of the measles vaccine and two other inoculations grew 24 percent from the same time a year before, to $348 million. The extra sales helped the Kenilworth, New Jersey, drugmaker beat analysts’ profit estimates.” [1]

From 2004 to 2015, there were zero deaths in the United States due to measles, but not the same can be said for the Measles vaccine. From 2004 to 2015, there were 108 deaths due to the measles vaccine [2]. However, thanks to the 1986 National Vaccine Injury Act, the United States government gave pharmaceutical companies total legal immunity from lawsuits originating from injuries and deaths due to vaccines. As a consequence, if you are injured or killed by a vaccine, you have to sue the U.S. Government and go up against their high-powered attorneys to try and prove vaccine liability, and vaccine companies can continue their business without fear of consequences, and this is only one example of deep government ties with the vaccine industry.

Another example of ties and corruption is the revolving door that is the CDC. For example, Julie Gerberding was in charge of the CDC from 2002 to 2009 and completely overhauled the agency’s structure and replaced many individuals with scientists who had ties to the vaccine industry [3].

After Gerberding resigned from the CDC in 2009, she took over as the president of Merck’s Vaccine division, the largest supplier of the number of vaccines the CDC recommends [4]. After the Disneyland measles drama episode, Gerberding’s Merck stock was valued around $2 Million, indicating she directly profited from the scare. Even a more provoking point is the government earns royalties for each sale of vaccine, so even if you disagree with anything I have said thus far, the point that the government receives a fee from every vaccine sale should point out the possibility of corruption.

I hope these two articles have pointed out the issues with Rockland County's decision to ban unvaccinated children from public areas and informed you on the various arguments against mandatory vaccine including possible government corruption.

Stay up-to-date with newly posted articles by signing up for Healthmasters' newsletters.